Chaos Dwarfs with Great Weapons. That champ is a beast!!! Still working on lava armor for the rest of the dudes.

Posted by Tony Pacheco at 4:50 PM No comments:

Last weekend I attended WaaaghPaca 2014, located in Waupaca, WI. It was the coldest environment I’ve ever been in (something like -20) but also one of the best tournaments I’ve ever attended. Something about having the threat of imminent death just outside the window and an even split of sports, paint and battle really makes for a solid group of gamers. Everyone had great looking armies and were awesome dudes to play against.  The tournament is also located in an Ale House, and since it is fucking freezing outside, everyone just drinks and hangs out when the hammering stops. I feel like I got to meet most of the ~100 players there and had 5 fantastic games. Here is how they went:

Game 1 - Ricky Mee and his Demons 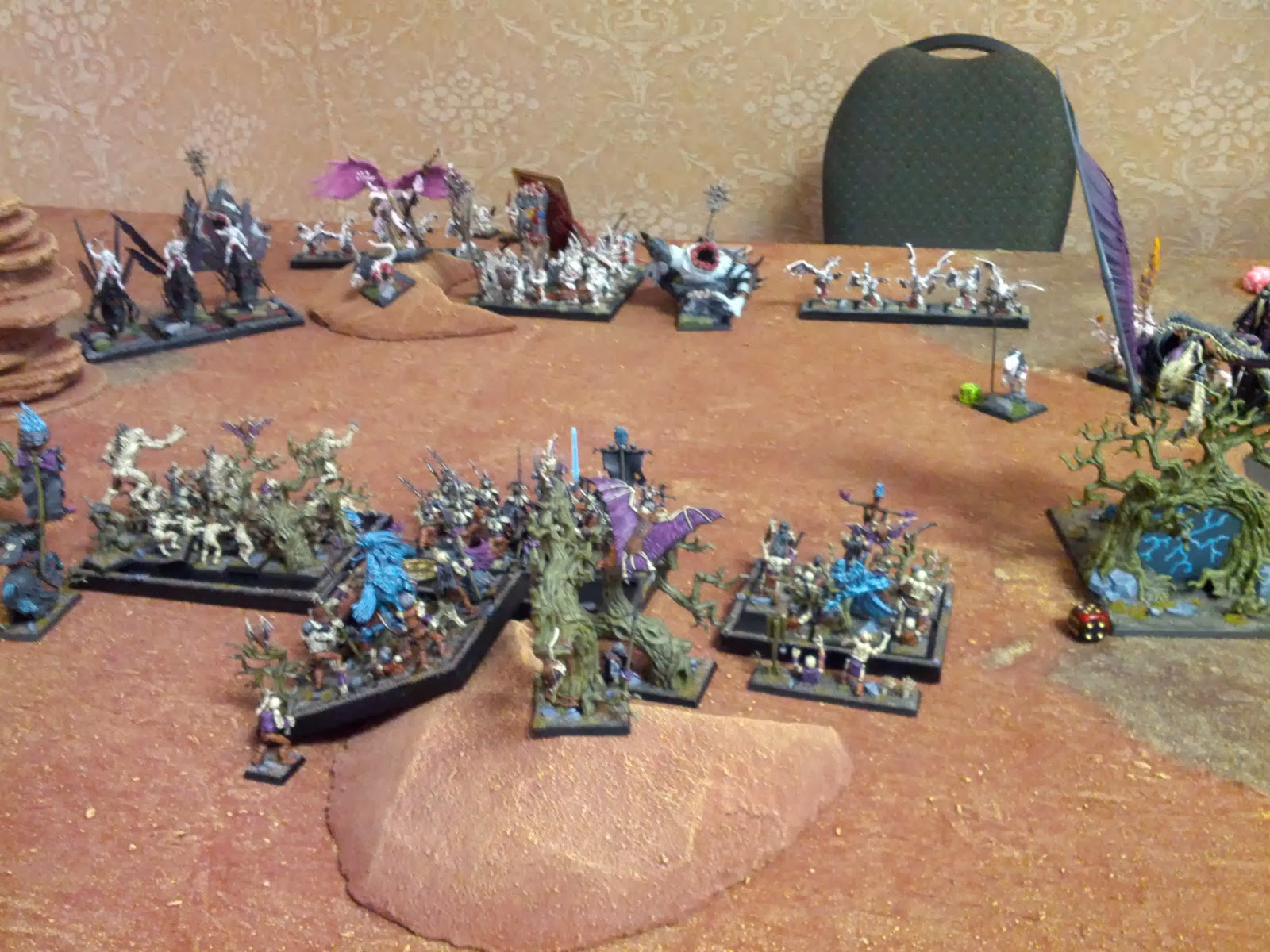 Lord of Change, nurgle bsb, plaguebearers, unit of drones, 2 nurgle beasts, 2 units of furies, 2 khorne cannons and a unit of pink horrors. I made and early mistake (I blame the hangover) and he was able to get the drones, LoC and a beast into my ghouls (without my lord) and blow the hell out of them. I was able to take down the drones with a zombie charge to the flank, but the rest of the game saw my struggling to get my VC lord into anything worthwhile while he chaffed me up. My TG managed to survive for a few turns and I had one opportunity to full health scream at the Lord of Change…. And rolled snake eyes! Khorne cannons ended up taking him out, and I lost more than 500 points to Ricky in a solid loss bro!

Game 2 – Lenny S and his Empire

Leny was rocking a Lvl 4 of Life, few other characters on foot, big block of halberdiers with a few detachments, 4 demis, 5 knights, cannon and 2 steam tanks. I’m not sure what my plan was in this game, other than to try to use the TG to take out the stanks. Typically I have a few hosts in my list which are an easy counter for those big dummies.  I was able to blast through one before I lost the TG to cannon fire, and the lord got held up with the other. Almost got it down but lore of life saw it come back from its impending doom. I had a few small opportunities for things to go my way but in the end just couldn’t get past that damn stank! Another major loss for me bro!

Game 3 – Lou M and his Lizardmen

Lord Kroak in some Temple Guard, ~30 Saurus with a Vet, Tetto’Eko in some skinks, 5 Cold One Riders and an Ancient stegadon. I think, memory is… fuzzy. Lou was the first game where my TG didn’t have to be dodging cannon balls and I was god damn excited about it. Temple Guard, Ancient steg vanguard all up into my face looking to blast me with Kroak’s mega kill undead AOE spell. I end up getting first turn and go straight into smash stegadon mode with my lord and the ghouls. I’m able to get Curse of Years off on the Temple Guard as well. His turn Saurus come into the ghoul / lord fight on the steg to help out. In his magic phase he fails to dispel curse of years on some shitty dice luck, which saves me from getting blasted. My turn the Grave Guard go into the flank of the steg, saurus break and die, and things get worse from there for him. Big win for the VC. We end up chilling / getting wasted the rest of the night, so much Lou is unable to play his first game the next day and wins the prestigious Hastings Hangover Award!

Game 4 – Tim Flanders and his Empire 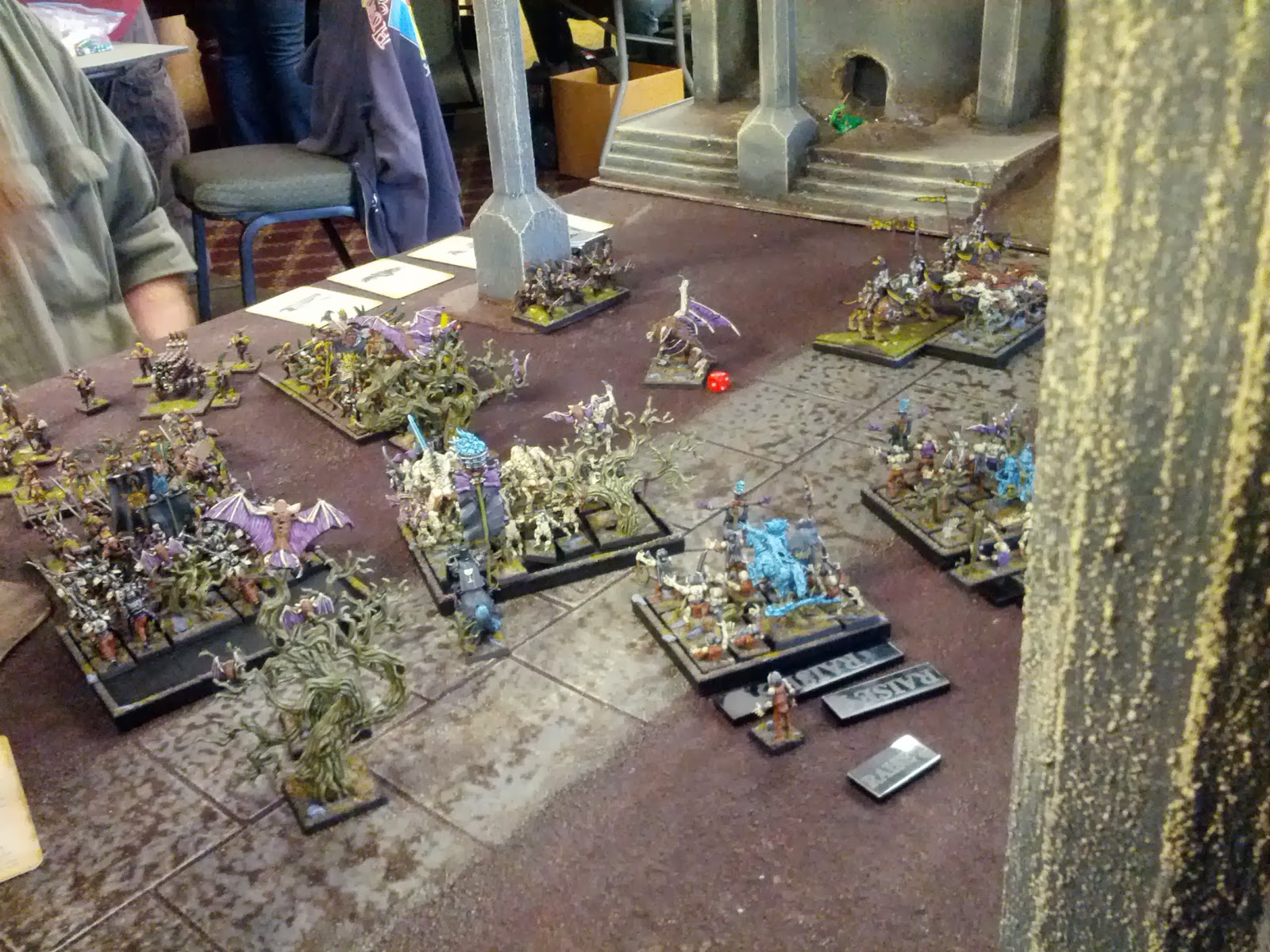 Lvl4 of Beasts, lvl2 of life, warrior priest, BSB, bunch of sword dudes, some detachments, some archer units, big block of greatswords, cannon, hellblaster, engineer and a unit of 4 demis. I go charging at him as fast as I can. I chaf up the demis, get my grave guard into his great swords, send the bats at the war machines, and set my vampire lord’s sights on the sword dude unit. Everything goes pretty much to plan, grave guard barely beating the greatswords with only 2 grave guard left, Terrorghiest gets a few screams off before being killed by the hellblaster and the vampire lord going bananas on the swords at about turn 3. Great game, nothing really insane happened, just a lot of beating on each other with buffed units. Win for the VC bro!

Game 5 – Christian Taylor aka “Bubbles” and his Wood Elves 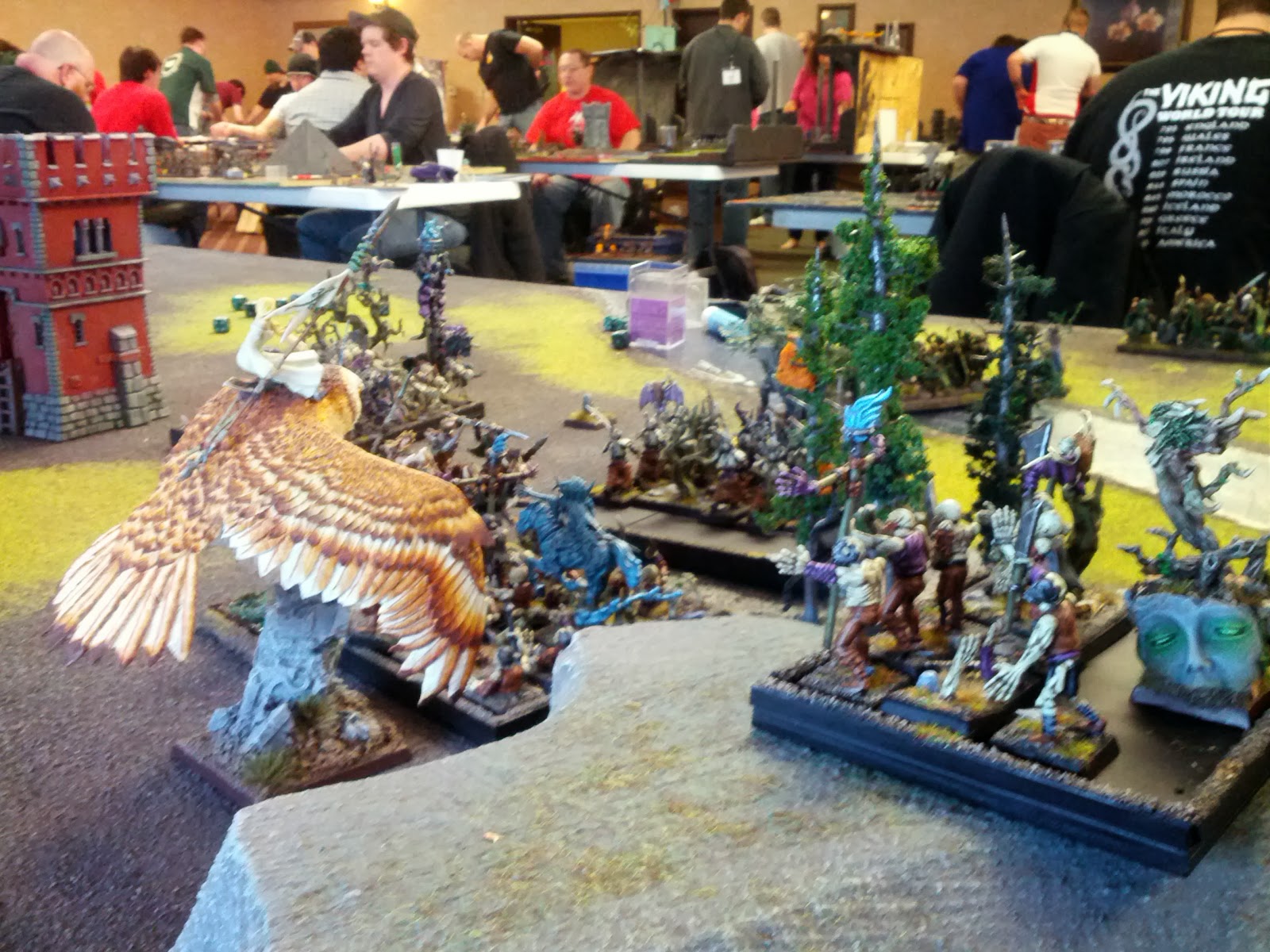 Lvl 4 of life, Alter Noble with annoyance, BSB on eagle, bunch of glade guard, 3 units of dryads, 5 wild riders, 3 warhawk riders and a treeman. Super soft list and I was quite happy to be facing it =). Game starts with his level IFing Dwellers on my zombie / lvl2 necro unit (which kills him) but she gets sucked into the warp and end up panicking her unit of ~20 glade guard! Huge bummer for him, awesome for my TG since this leaves him with only ~20 archers to worry about. The game comes down to my VC lord and his ghouls beating on some T6 dryads and a hard to hit alter noble and my Grave Guard beating on a treeman and some dryads. Since the TG is allowed to live for a few turns, he pretty much screams at shit and makes things go my way. The lord also popped his potion of strength to mop up the T6 dryads to free my ghouls from that fight. Christian did the best he could with the uphill battle, but the TG being able to do whatever he wanted was just bad news. Major win for the VC!

Results
I ended up 3-2 and placing 11th in the tournament. Pretty good run for the VC and I think if I made a few tweeks (and a few less mistakes) I could have done a little better. Still, I came to this tournament only wanting to drink some brews and roll some dice and I had a great time doing it. Every single one of my opponents was a great guy to play against and I’m being very serious when I say that. It was very cool to meet all these dudes and I hope that I can return next year just so we can all hang out again.

Couple WIP corsairs and Bleaksword.
Posted by Tony Pacheco at 5:19 PM No comments:

Posted by Tony Pacheco at 4:11 PM No comments:

Tony Pacheco
I'm a guy who really enjoys painting warhammer figures. I also like to play games with them.